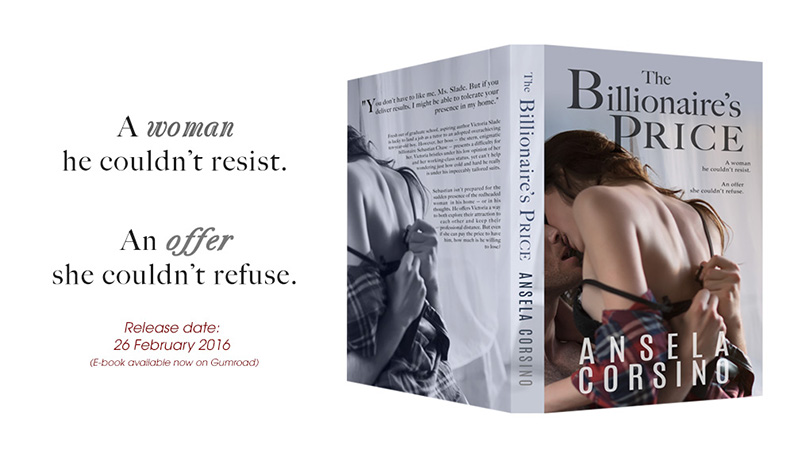 It’s taken almost a year to write (I’m slow), but my first book The Billionaire’s Price is finally getting (independently) published on February 26, 2016. *throws confetti*

It’s currently available on Gumroad right now (both Wattpad version and this new final edited version in one bundle), but it will be available on Friday on Amazon (pre-order it here), iTunes/iBooks and other ebook retailers on Friday, February 26. You can also buy the paperback edition on Amazon.

How is this different from the one that’s on Wattpad right now, you ask? Good question. *clears throat*

For one, the edition that’s on Wattpad is basically my first draft. I’ve been writing and publishing it as a serial, so I couldn’t go around changing things because I would confuse readers. After I finished writing it, I went over it again and revised some parts. A lot of parts. Especially in the beginning. Because this was my first time to write a novel, so I didn’t know what the hell I was doing when I started. I look back at the first chapters of that draft and saw Victoria and Sebastian acting out of character in some parts because I think I hadn’t figured them out yet. So, yeah, changes. Then my editor worked on it, and we discussed problems in the plot and narrative. After that, I submitted it to Amazon and Smashwords for distribution (pre-order pages here, here and here).

Two, TBP now has a spanking, sparkly new cover. You like?

I’ll be doing a bunch of promotional stuff in the next few weeks, including a giveaway. So subscribe to my mailing list or check back here to find out if you can win a free copy.

Thanks for all your support.

Thank you to all my readers on @dorian.live ❤️

When you forgot to buy a kitchen knife but still i

Sign up for my newsletter! No spam, all news. And