🎧 s2ep02: What Twitter teaches us about owning your online presence. Plus: Happy National Novel Writing Month! 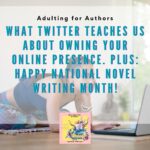 Adulting for Authors
🎧 s2ep02: What Twitter teaches us about owning your online presence. Plus: Happy National Novel Writing Month!

Hello, friends, it’s November 2022. Happy National Novel Writing Month. Some of you may be doing NaNoWriMo this year. I won’t be. Probably not. For various reasons. But I feel that even if you don’t plan on doing the NaNoWriMo challenge, it doesn’t mean we can’t celebrate National Novel Writing Month. How I’m going to do that, I have no idea. There was this time I tried to do a podcast episode a day for each day of November. So that died quickly. Yeah. But I don’t know. I seem to be more comfortable with my audio recording setup now. I can still do it. Even though it’s technically already November where I am as I record this. On the other hand, it’s still November 1 in the States. I don’t know. We shall see.

I tried recording this episode a few days ago and… I mean, I did. I did record some things. And it’s so funny, because so many things I talked about, they’ve become obsolete more or less after a couple of days. Especially the thing about Twitter. Because when I first tried to record this episode, [Twitter] had just been sold to some person whose name I will not mention in this podcast (I will not sully my podcast with his name). And since then, there’s been talk about, oh, you know, Twitter’s gonna start charging a certain amount of money for users to keep their blue checkmark. And since then, the amount has risen to $20. So the news was, Twitter was going to charge $20 for Twitter Blue, which is this, like premium Twitter, which you will need to keep your blue checkmark. Right. And I woke up today to to see a tweet where the guy who bought Twitter was, like, negotiating. He was negotiating with Stephen King. Because Stephen King said, Yeah, I’m not gonna pay $20 for my blue checkmark, that’s… that’s ridiculous. And it’s Stephen King. He can afford it, right? He’s not going to feel $20 a month. So you know, if he says he’s not gonna pay it, it’s more of… on principle. And then the new owner of Twitter replies to him and says, What about $8? A guy who’s worth, like, what $200 billion, is negotiating with a guy who’s worth, like, $500 million. It’s so wild. Things have gotten so wild that we are running out of words to describe what’s going on.

Everybody used to say that Twitter was a hellscape. And, yes, in a sense, it is. This is why I have such a long mute… list of muted words. And it makes the entire Twitter experience pleasant. I actually enjoy being on Twitter. And not that I am actually selling a lot of books on Twitter, but that’s not what I’m there for. The whole thing has been fun so far. But yes, Twitter was a hellscape especially for certain kinds of people. It’s not their fault. There are just horrible people on the internet, just like in real life.

Now, with this new change… this new changing of the guard — changing of the owner— things have gotten worse. For one thing, apparently, the entire board of directors of Twitter was dissolved. So now the owner is the single member of that board. And a lot of high a higher up executives were fired. They were let go. I don’t know if it’s the same thing. But they were let go. And apparently the people who are monitoring, like, reports are either suspended or they were also let go. So there’s no one’s moderating anything. It’s …it’s wild.

So the whole thing got me the thing getting ready. I always tell people — well, I try— not to be too dependent on platforms, especially free platforms. Social media platforms— you know, Twitter, Facebook, even Wattpad. It’s not a good idea to make your entire career or your job or your income dependent on a platform that you don’t pay for, that you don’t own, that you have no stake in. Because shit like this happens. And I feel bad. There are a lot of artists and creators and writers who have built a following on Twitter. Let’s I mean, let’s face it, the users are the content creators on this platform. And that is what we are there for, right? I’m there because of the people I follow. They’re fun to interact with. They post a lot of hilarious stuff. It brightens up my day. Their art is beautiful. And, yeah, that’s what I’m there for. And it’s ridiculous that the platform is making them pay for the privilege of providing content for the platform.

So yeah, back to the point. Don’t depend on free platforms. Don’t base your entire career, your income on free platforms. This is an argument I use whenever I try to convince people — convince authors — to please get a website, please register their domain. You need a place that belongs to you, that no one can just decide to disappear for any reason. A place online you have control over. It’s the same thing with newsletters. Yes, you do depend on a newsletter service, but your followers, the people who have subscribed to you— they belong to you. The contract is between you and them and not the mailing list service provider. So anytime you want, if you don’t like their service anymore, you can just switch to a different one. Take your mailing list with you. It’s fine. You still own it.

You can’t do that with Twitter. You can’t say, “Oh, I’m… I don’t like Twitter anymore. This is an even bigger hellscape than it used to be. So I’m just gonna take my followers and transfer them over to, like, Tumblr or Instagram.” You can’t do that, it’s not a thing. So yes, own your online presence. I don’t own my Twitter presence. If Twitter decides to kick me out. There’s nothing I can do about it. It’s the same thing with Wattpad.

Last week in episode one, I didn’t actually commit to make this regular podcast. I said maybe once … once a week. Maybe twice a month or every other week. But if this goes out, that means it’s … it’s a thing I’m going to be doing now. I’ve decided Wednesdays. I would have an … I would have an episode out every Wednesday. Mostly because most of the podcasts I listen to, they always have a new episode out on Monday. And I thought, you know what, let’s let’s spread the love around. I should put mine out on a different day. So … so Wednesday. This is… if I do this right, I’ll have an episode every Wednesday. Plus, I already have a Monday deadline for a thing. My Patreon schedule is a new chapter every Mondays so I didn’t want to be scrambling and rushing to finish things. Yeah, I think that will be a … that will be a good schedule. I mean, look at me, right. I’m scheduling stuff now. I don’t usually do that. I just … my life is chaos. So Wednesdays. I hope I get my next episode, episode 3 out on time next week.

Although I am considering doing, like, random episodes because I don’t know things just keep happening and I want to talk about it. And I don’t want to blog. I explained it in the last episode why I don’t wanna blog anymore. So if I have something to say, I’ll just have random episodes here and there but I’m gonna be aiming for once a week on Wednesdays. If you’re not subscribed to this podcast, this is Adulting for Authors. You can find it… just do a search on your favorite podcatcher and… and subscribe. So every time there’s a new episode you’ll you’ll … you’ll get it.

That’s it for now. I have errands to do today. It’s November 2. It’s it’s the first business day since October because we had a really long weekend. So Monday and Tuesday were non working holidays. And I have to go to the bank because, adulting things. This has nothing to do with writing, but we got to adult.

I’ll talk to you again soon. In the meantime, good luck to everyone joining NaNoWriMo. And for all the other writers, I wish you a productive writing week. Bye!